Sir Squarehead has a good head on his shoulders.
Ask for him whether moving men or boulders.
He has an odd sense of humour.
Is he serious or not, you hear many a rumour.

Lady Squarehead puts up with her spouse.
His sense of humour can drive her out of their house.
But their love for each other is certainly sincere.
They’ll be around long as a couple, you heard that here.

The Squares and the Lasses are a happy crew.
They’re chips off the old block — hard workers — nothing new.
The Lasses are busy working inside and out
The Squares the same plus their military shout.

Sir Squarehead find donkeys good in the wilderness
Wagons still are a choice where roads and tracks exist.
He raises his own and trains them as well.
Promise to be nice and perhaps he might sell.

Here’s a long time cast member. Sir Squarehead has tended to make quips in the background at times. He might be the engineer of the kingdom in his own way.

Vlad the New Tailor and Entourage

Vlad the new tailor
Is not an impaler
Unless you are considering his thumb.

Cossacks travel with him
Dressed in fine trim
Serving as protection and companion.

Not all who follow are male
Lady Cossacks fill the detail
Whether on horse or in the household they run. 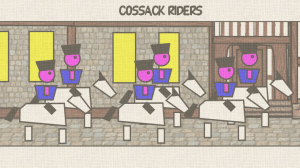 Cossack riders can be impressive indeed.
They ride swiftly and can fight from their steed.
Their riding is almost like a dance.

Vlad travels in style, his carriage matches his taste.
Black is his favourite colour with red it is traced.
Cossack driver and footman complete his ride.

A tailor needs supplies.
Of course that doesn’t come as surprise.
A wagon to match his carriage suits his needs.

When stormy evenings arrive
The group gathers to jive
All around the fireplace they gather in fun.

Introducing a new arrival in town. Vlad the new tailor arrived with a bit of fanfare especially when Sir Biff thought he heard the fellow was “Vlad the Impaler”. After some intrigue things were straightened out.

Vlad was introduced almost a year ago in the short cartoon I wrote for Halloween called “Vlad!“. It is hard for me to believe The Gnome Tapestry is almost one year old.

In Notinwood Forest, a wood nearby but deep
Dwell an outlaw band that through the trees creep.
Notinhood and the Timbermen pursue a life rough
Combating injustice, it’s a tough job but they’re tough enough.

Notinhood, the leader of this outlaw band
Lives in the forest, but travels all the land.
He gives to the poor but doesn’t steal from the rich.
Somehow he manages that without any hitch.

Rusty Bill is an archer of no small renown.
He loves telling tales in pubs while dodging the crown.
He often leads The Timbermen patrolling the forest.
If there’s a quiz for leadership he passes the test. 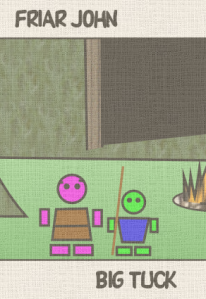 Friar John provides the a moral compass to all.
He’s a spiritual adviser keeping others from a fall.
The good Friar is much more than it appears
His prowess with a staff fuels his enemy’s fears.

Big Tuck’s young but learning things fast.
Living life now, but he has a dark past.
Tuck has a knack with all animals
From ones in the wilds to ones in barn stalls.

From time to time come a group of three.
They bring their own skills even while a mystery. 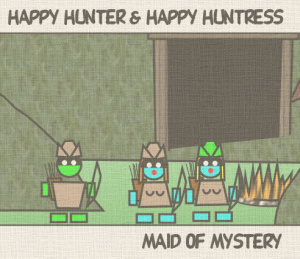 The Happy Hunter knows the woods like the back of his hand.
It’s like his day job is out watching the land.
The Happy Huntress and Maid of Mystery
Are treated like the lads but are lasses you must see.
Somehow the Huntress seems regal in the way she rides.
But she pitches right in with work, or when the band hides.
Maid Mystery too has that regal air.
With Happy Huntress they make a great pair. 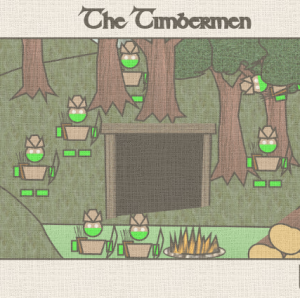 This group’s called The Timbermen, men of note.
Remarkable legends of them are now wrote.
Woodsmanship, marksmanship, horsemanship,
Working in forest fields but not often in a ship.

An introduction to the denizens of the Forest of Notinwood in The Gnomestead Tapestry. Who shall we bio next?

I’m not sure just how many Timbermen there are. Notinhood and the Timbermen and other followers make for an impressive band of archers. In an emergency, if called on, they could take the place of the missing Cringle archers. These characters were actually in the third story I did, “Notinhood!“, but I missed publishing it without realizing and the some of the characters introduced in the story appear many times in later stories.

Some Locations Used in the Gnomestead Tapestry 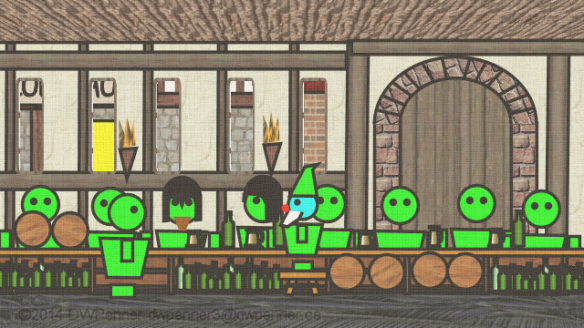 The Gnome’s Tavern. All are welcome.

A place for sharing stories
Taverns are where folks gather
All are welcome there. 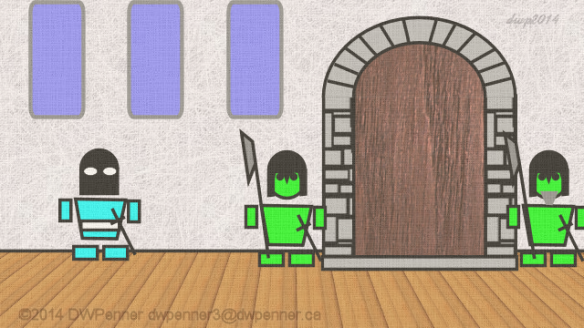 The gateway into the keep’s great hall. Often open during the day, but closed at night and requiring a password. 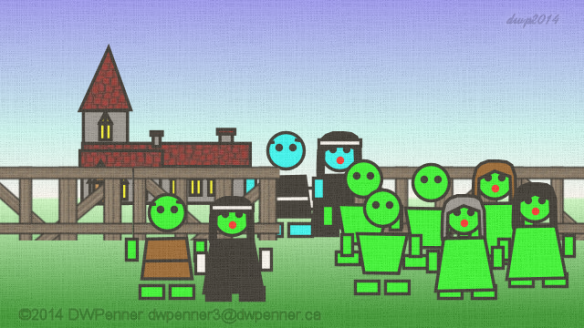 The churchyard, fenced not to keep people in our out, but just to let you know it’s there.

Here are three locations that have been or will be used in The Gnomestead Tapestry. I’m showing them without the tapestry borders I normally use. It gives more room for the set, though a little loss of tradition.

The King is a leader among men
When he orders to arms they don’t say “when”.
The King doesn’t do this all alone
But has advisers to the throne.

The Queen shares the rule of this land
From household to organizing war band.
She rules at the King’s side
Not just along for the ride.

Two children have the Queen and King
A Princess and a Prince being peers is their thing.
Along with these youth is a friend.
Maid Martha, fostered, loyal to the end.

Brother Jacque and The Sister
Are two of the Royal advisers.
They provide sound advice
Sometimes strict but always nice.

The Forester advises on forests and croplands.
He tries to know what’s in the woods and the crops at hand.
In the keep, you’ll find the Ladies in waiting.
Looking after things keeping them running.

The foreign agent known simply as “Seven”,
Works very hard often having dinner at eleven.
Father Alex can be found rallying the population spiritually
With advice, wisdom, and sermons some find lively.
Reverend Mother though a bit stern
Has respect and it is well earned.

There are many ladies in waiting.
Some through the keep, generally keeping.
Others the Royal Family is their domain.
Pages and Equerry do muchly the same.

These are the members of the Royal Household
Some are demure, but most are bold.

An introduction to The South Cringle Archduchies Royal Household in The Gnomestead Tapestry. Who shall we bio next?

Sir Peanut is a leader of men —
Leading charges on field and glen.
Sir Peanut leads a troop of cavalry.
They keep the people and kingdom free.

Lady Peanut is a lady fair
Inspiring her lord with care
She’s a beauty for sure,
Riding beside her noble Sir..

Gallery Boys and Sweetpeas
Support Sir and Lady Peanut in myriad ways.
Riding, homemaking, taking care of the mounts.
Loyalty and spirit are what counts

Jousting or tilting at targets is a skill.
It can give any audience a grand thrill.
But it is practice in deadly earnest —
Preparation for battle blackest.

An introduction to Sir Peanut, Lady Peanut, the South Cringle Cavalry, and the Sweetpeas of The Gnomestead Tapestry. Who shall we bio next?

This is Sir Norseguy, fearless and brave —
On foot, on horse, and upon rolling wave..
He flies into battle, his troops are fleet.
They’ll follow his lead without skipping a beat.

Lady Norseguy is more than a simple housemaid.
She’s good with sword, axe, and ship; in battle she’d wade.
Her home doesn’t languish, it’s neat and prim.
A dish out of place and she’d be quite grim.

Squire Norson is cut from his dad’s cloth.
Working hard on land and storm surge froth.
Norseguyson is a force to be reckoned with.
He’s learning to fight or become a blacksmith.

This is an introduction to cast members of The Gnomestead Tapestry. This time with Sir Norseguy, Lady Norseguy, their two sons and retainers.

This is Sir Biff, he’s brave and so bold.
He likes to think he’s a knight of olde.
Sir Biff backs the King through thick and thin.
With him on your side you’ll surely win.

Lady Biff is his wife, cast in the same mould,
But she has a soft side, she’s a heart of gold.
Lady Biff runs their keep and keeps it on course.
She doesn’t use a sword but can ride a horse.

This is an introduction to cast members of The Gnomestead Tapestry. I am starting with Sir Biff, Lady Biff, their two sons and their retainers.

The following is the introduction I created for The Gnomestead Tapestries given by the fictitious character — Gnorman the Gnome.

Welcome! Now just to set things straight, even though I’m not as tall as the trees and my home

is warm and dry, and has a sod roof — I’m not a “Hobbit” or “Halfling” or one of the “Wee Folk” despite the green hat.

I came to the South Cringle Archduchies a few years ago… …and now call it home. It is an interesting kingdom filled with such interesting people.

An overview of the castle with many of the occupants of the lands.

This is the introduction I have been using. when I put it into the slide-show it runs 1 minute. I note that there is a misspelling. But it is still understandable and I am not about to redo the comic panel for it. I did the intro years after I did the first cartoon. It took a while to find a public domain image from the Bayeux Tapestry.

I’ll post another cartoon soon. the next may be broken up into two or more parts.

Posts and cartoons sent to your RSS reader